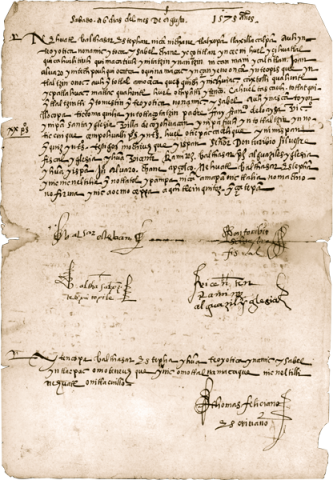 [Introduction by James Lockhart:]
In the introduction to Doc. 20, originally titled "Juan Alvaro sells or dontes land to church, COyoacan region, 1575," it is asserted that direct sales to the church were rare, yet this very next document is another such sale. On close examination, however, we find that the two are related, part of a single operation by the Dominicans of Coyoacan. The sale takes place less than two months after the one in Doc. 20; present as a witness is Juan Alvaro, the seller in the other transaction, and the plot borders on the holdings he sold then. In this case we are told that the land of the friars is in the same place, confirming the nature of the whole operation as it already appeared from the other instance. Again the price is high; 20 pesos in cash for a plot 15 quahuitl by 10 (well under half of the normal 20 by 20 parcel) is three or four times what one would normally expect.

The land being sold came into the marriage through the wife, named only Isabel. (It is interesting that man and wife list themselves as associated with different tlaxilacalli; chane can mean either citizen of or born in, or both. The plot is called the wife’s “woman-land,” -cihuatlal, which is here most usefully defined as having been left and given to her by her father and mother. Emphasis is placed on the assent of both man and wife to the sale.

The style as well as the notary and witnesses are the same as in Doc. 20. The seller Baltasar Esteban again has a humble name, but we do know from elsewhere that he was constable of the Dominican church and monastery (alguacil de la iglesia y monasterio: Carrasco and Monjarás-Ruiz, Colección de documentos sobre Coyoacán, 1: 159.) Instead of drawing a cross like Juan Alvaro, he makes a signature. He may mean the rubrics only, which are fluently done; the name written alphabetically would be hard to distinguish from the notary’s writing. Usually when a person actually signed the name, the record speaks of itoca, “his name.” In any case, even though the land came from his wife, the husband is treated as the primary seller, and there is no mention of any signature by the wife.