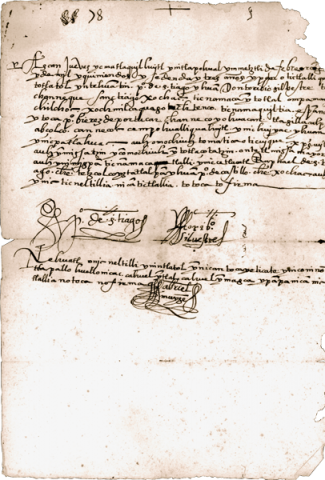 [Introduction by James Lockhart:]
Here two indigenous men sell a piece of land to a Spaniard in order to pay for a mass for their father, no doubt recently deceased. Selling land to pay for masses was very common in the sixteenth century; see The Testaments of Culhuacan (Cline and León-Portilla) for many such cases. Possibly the reason was merely the drastic population decline of that time and the consequent overavailability and cheapness of land, but other factors also no doubt contributed. As time went on the practice diminished and is no longer typical by Stage 3.

It is not a contradiction that the Spaniard to whom the land is sold is Portuguese, for both indigenous people and the Spaniards themselves mainly considered Portuguese to be a subdivision of Spaniard. Here the buyer is called Pedro Pérez de Portugal; in another document in the McAfee Collection, the name appears as “Pierres de Portugal,” and again as “yn señor Perez” (señor was often used in Nahuatl texts to indicate that a person was a Spaniard without saying so more explicitly.)

The two sellers must be brothers who had jointly inherited from their father the land now being sold. The piece is of the classic size of 20 by 20 units, and the price given for it, 10 and a half pesos, is more than one might expect in most places unless there was something unusually valuable on the land. But being close to Mexico City, Coyoacan ranked high in land values.

The sellers are socially high ranking. That Pedro de Santiago is mentioned first implies that he is the elder of the two brothers, but the second person mentioned is the more prominent of the two. This don Toribio Silvestre has been seen here as fiscal (Doc. 20, 1575); he is rising, since in earlier texts he is not called don (Doc. 12, 1557); as early as 1559 he was alcalde on the cabildo of Coyoacan (Horn, Postconquest Coyoacan, p. 244). Even here he signs without the don, probably having gotten used to the signature in that form. Some people not accomplished in writing learned to make their signature without don and never did change it when they acquired the title later. But Silvestre, as fiscal and member of a circle including notaries and ecclesiastical aides, doubtless could write. In his signature of 1575 he adds the don himself.

The people mentioned here are from several different tlaxilacalli of Coyoacan, and the land appears to be in yet another place. Thus each tlaxilacalli is not a hermetic unit; especially when Spaniards and prominent indigenous people are involved, we see a general fluidity and interaction.

Title variants:
Beyond the Codices, Document 16; Sale of land in Santiago Xochac to a Spaniard
Principal editor:
James Lockhart